In the fairytale Cinderella, she is turned into a beautiful princess for one night while she attends the Royal Ball. The only catch is that she has until the clock strikes midnight to find her prince and make him fall in love with her. 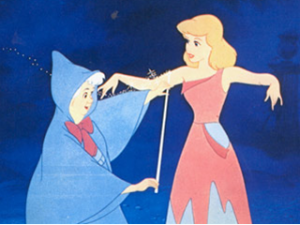 Where is my fairy godmother when I have nothing to wear?

In Los Angeles, this is a daunting task considering that everyone begins to show up at the bars, clubs and parties at about 11:30. So let’s say LA fairy godmother (actually from WeHo) gave us until 1:30, which is pretty much the time they  like to jolt us out of our drunken stupor with the harsh lights. That means we’ve got about 2 hours to shove our way up to the bar, catch the attention of the bartender, buy a drink, make our rounds through the crowd and have a meaningful conversation with as many men as we can in order to assess each one for Prince Charming potential.

And how do we ever know how to find Prince Charming? Well if life were a fairy tale like us girls grew up with, our Prince Charming would always be the best looking guy in the bar. But of course we all know that the best looking guys in the bar are the ones with the dullest personalities and the worst attitudes. And…they are looking to get laid, NOT fall in love. And now I pose the question: have fairy tales ruined us? I have written a newer version of Cinderella, as it takes place in Los Angeles, in comparison to the real fairy tale. 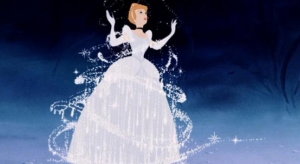 Okay ready? I'm going to close my eyes now and when I open them, I want to look this glamorous.

LA: You hang out at your girlfriends house, chatting about where to go, how lame last weekend was, and the latest friend gossip. You do your own makeup and hair, and waiver between which outfit to wear that you bought at the new trendy thrift store. “Which outfit is the most hipster without trying to look hipster?” Then you sit on the phone for 10 minutes while you call a cab.

CIN: Fairy Godmother appears after crying alone outside. You close your eyes and instantly your dress, makeup and hair are done. All of your mouse friends are transformed into people and a pumpkin is transformed into a carriage. 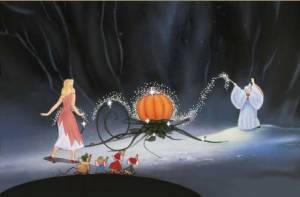 Maybe the back seat of the taxi cab would be as sticky as the inside of a real pumpkin.

LA: Your cab arrives, you sit in the dark and smelly backseat that feels like plastic. You wonder who the last riders were and what they did in the backseat that made it so sticky. You get dropped off across the street from the bar so you don’t have to pay the cab driver to turn the car around in traffic.

CIN: Your former mouse friends drive the pumpkin-turned-carriage right up to the front door of the castle. 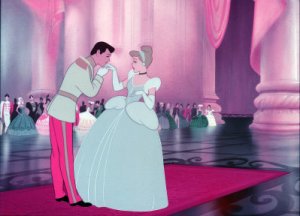 Love at first sight. Well duh, look at her dress...

LA: Arrive at the bar. The line is down the street, filled with all potential Prince Charmings. You and girlfriends slide up to the bouncers and get in immediately. You stand around in a half empty bar filled with girls and rich and/or well connected snobby Beverly Hills guys.

CIN: Arrive late to the ball, make a grand entrance in your ball gown, the spotlight shining on your face. Everyone is in awe, the crowd parts and the Prince catches a glimpse of you and is stunned. He chases you down, you have a meaningful conversation with him and kiss him. 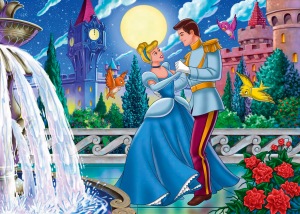 Wait a second...it is never this beautiful when I'm talking to a guy. I guess when you're really in love, the birds fly around you and the flowers bloom..

LA: The guys start rolling in. They are angry, cold, and need a drink. There is a traffic jam at the bar which makes it impossible for you to get a second drink before your buzz wears off.

CIN: The clock strikes midnight, you were having such a magical time you didn’t even notice. You run off, tripping and leaving your shoe behind. You make it home just in time to see your outfit turn bag into rags, your coach turn back into a pumpkin and your friends turn back into rodents. Prince Charming saves your shoe, and vows to track you down with it.

LA: You start to strike up conversations with men. Horrible attitudes, stupid pick up lines and general awkwardness keeps you moving along. Your buzz is wearing off. You head to the bar and someone offers to buy you a drink. You gratefully accept it because you’re running out of money. You are polite and chat with him for awhile. If he’s extra pushy, you end up giving out your phone number to someone who is not your prince. You chat with a few guys in your immediate vicinity because you have lost the ability to move around freely in the crowd – most people are in, everyone from the beginning is still there.

CIN: You go to sleep early with images of the Prince in your head. You have to work the next day afterall.

LA: Time is running out and you haven’t found your prince yet. Some people have cleared out, all the guys that were in line are now in. You can move about somewhat freely again and spot a guy. Disclaimer: the following depicts a best case scenario on a really good night. You walk up to him, you have a conversation with him. It is interesting, maybe sort of interesting, but at the very least non-douchey. You give him some slack because he’s cute and everyone is buzzed anyways. He doesn’t immediately suggest sex…all is going well. 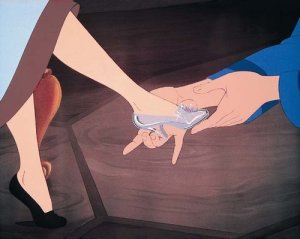 I can't ever find my shoe size in the store and now this?? Why is being a common shoe size such a curse?

LA: The last call was announced and everyone has slammed their drinks. Everyone is now drunk and the lights are slammed on. Your eyes adjust and your Prince Charming turns into a pumpkin under the harsh bright lights. You try to rally your friends to get out quick, and they have all turned into annoying drunks. You never had a coach to ride in, but now even all the taxis are taken. The clock has struck and your world has transformed. You head to the bathroom and notice that you look like crap when only an hour ago you seemed to looked stunning in your drunk state.You stagger out of the bar, trip over the curb and face plant on the side walk. You lose your shoe as you climb into a taxi in a rush.

Then…your real Prince Charming walks up and picks up your shoe. He wonders who it belongs to, if it was that girl he caught a glimpse of from the other end of the bar while you were talking with your pumpkin prince. He tosses it into the gutter as a lost cause because there are most likely a half a million girls in Los Angeles that wear a size 7.